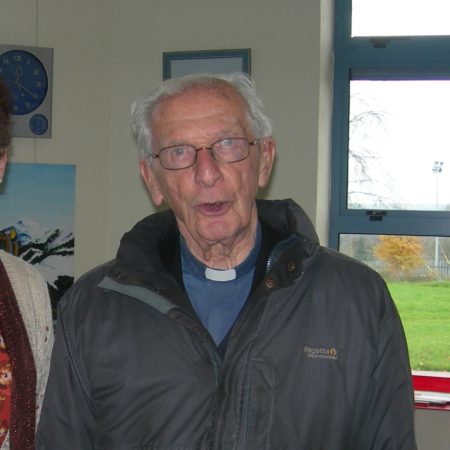 It is with deep sadness that we announce the death this morning, 27th April, of Reverend Father Robert Arthure, PE.

Fr. Arthure served as a member of our school’s board of management from its inception until 2020, but of course played a huge role in the story of primary education in Cappoquin since long before Bunscoil Gleann Sidheáin existed. In different capacities, mostly as chairperson, he made a lasting contribution to previous incarnations of our local schools. He was certainly a major driving force behind the creation of the current school, acquiring the site for the parish and garnering both local and Departmental support for its construction. He was our guardian, a regular visitor and a great supporter of everything at the school, to the last. As recently as last Christmas, Fr. Robert was available to help deal with various queries about boundary fences, and as late as last Friday expressed his delight at the peace of mind he got from the news that the school was again open to all our children. It was typical of the man that, when asked about an appropriate gift from the school to mark his retirement, he suggested the simple planting of a tree, one that would have nice seasonal colour to help inspire the children. That tree, a mountain ash, was planted near the entrance to the school building some weeks ago.

We use cookies on our website to give you the most relevant experience by remembering your preferences and repeat visits. By clicking “Accept All”, you consent to the use of ALL the cookies. However, you may visit "Cookie Settings" to provide a controlled consent.
Cookie SettingsAccept All
Manage consent

This website uses cookies to improve your experience while you navigate through the website. Out of these, the cookies that are categorized as necessary are stored on your browser as they are essential for the working of basic functionalities of the website. We also use third-party cookies that help us analyze and understand how you use this website. These cookies will be stored in your browser only with your consent. You also have the option to opt-out of these cookies. But opting out of some of these cookies may affect your browsing experience.
Necessary Always Enabled
Necessary cookies are absolutely essential for the website to function properly. This category only includes cookies that ensures basic functionalities and security features of the website. These cookies do not store any personal information.
Non-necessary
Any cookies that may not be particularly necessary for the website to function and is used specifically to collect user personal data via analytics, ads, other embedded contents are termed as non-necessary cookies. It is mandatory to procure user consent prior to running these cookies on your website.
SAVE & ACCEPT